First, our Mom stinks and we have a bajillion things to tell you that we haven't told you yet because...she stinks!!  We're SO behind.  We want to have a good scrapbook of the last couple months of our lives so we're going to make some posts that are almost aaaaaall pictures so get ready.  After we're caught up we're gonna blog normal because we have TONS of stuff to tell everyone!


Our friends over at the Houston Pittie Pack have suffered a terrible tragedy.  Last night their house caught on fire and five of her pack members were killed.  Thankfully everyone else got out ok but it sounds like the house is a total loss.
They're going to need help so if anyone is interested in helping out I'm trying to find out where to send mail to.  She will need basics to get back on her feet, take care of the family and remaining pups (Brinks & Bella) so possibly Walmart or Target
gift cards, etc would help plus the donation account is above.
Rest in Peace, Sweet Ones...
Coco Chanel

Many of you might remember Shelby's story when she was first found...so happy she had a wonderful life after that.
Maryann & The Brat Pack
Posted by The Brat Pack at Friday, December 16, 2011 16 comments:

My big Bear crossed the Bridge this morning. He has been having issues with his Laryngeal Paralysis and things had gotten to the point where he was struggling too much to breathe easily anymore. Thanks to our friends through the years who have followed his stories and life since he came to live with me.  A huge thank you to Dr. Becky and Marie for taking
care of him this past year.
I want to post some pictures of him, but will need a bit first.

We hate balls, too.
http://www.ihateballs.com
Posted by The Brat Pack at Wednesday, November 30, 2011 2 comments:

Dr. Becky brought me a WHOLE BOX of presents!!  She even said FOR OTIS when she was here and I was all OH YEA and BACK OFF to squatty boy Conrad.
Guess what was in the box....
You'll never guess....
TOWELS!! MY FAVORITE!

I'm sad to tell our friends that Samantha Jane crossed the Bridge today. She fought the Bone Cancer since March, was as tough as nails but it finally was just too much for her. She was happy to the end and enjoyed a buffet this morning of a 4-egg cheese omelet, 8 strips of turkey bacon, a chicken breast, several pieces of beef jerky, a heap of liver treats and an entire container of Cool Whip. Thanks to everyone who loved her, followed her blog adventures and supported us through the years.
We haven't been keeping up with the blog (and that's going to change) but I wanted to share some pictures from the Basset Hound Shuffle a month or so ago plus pics of Sam last night and today. (That's her thermal underwear shirt she slept in so the hot water bottles weren't against her skin)

She will be sorely missed around here, the boys won't have anyone to boss them around and be scared of anymore.  A couple of my favorite pics from the past....such a sweet, sweet (and stubborn) girl.

You might have to click to make it big...she Photoshopped me in these pictures, I didn't do it.
Posted by The Brat Pack at Monday, September 19, 2011 5 comments:

Rulon-Mooch here!  Otis left today and we were all NO WAY and Conrad was all YES WAY HE DID and I was all WHAT A PUNK!!!

Then we all went to sleep.

When we woke up Big O was back, we were all going to kick his butt but then he had a box that smelled like heaven, so we let him live.

I'll let the pictures speak for themselves...good thing I posted instead of Sam the Ham because she'd be describing every pic until you were all KILL ME NOW.

PS The scale starting screaming when Otis stepped on it and yelled YOU'RE a FATTY so he's on a diet.  This is like his last supper before living on carrots and green beans.

PS again.  OK, the scale didn't say that, but if I had been there I would have yelled it.

The last PS...These are Wheat Free Pupcakes from Three Dog Bakery in Southlake.  Four paws UP!  Well, Bear just said technically that's 20 paws up since there are 5 of us.  What-evah - they ROCKED! 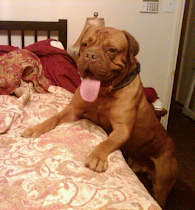 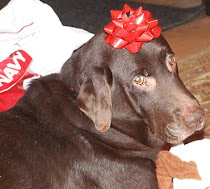 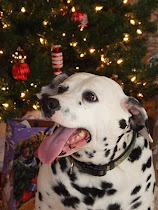 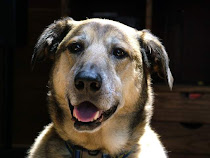 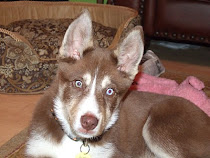